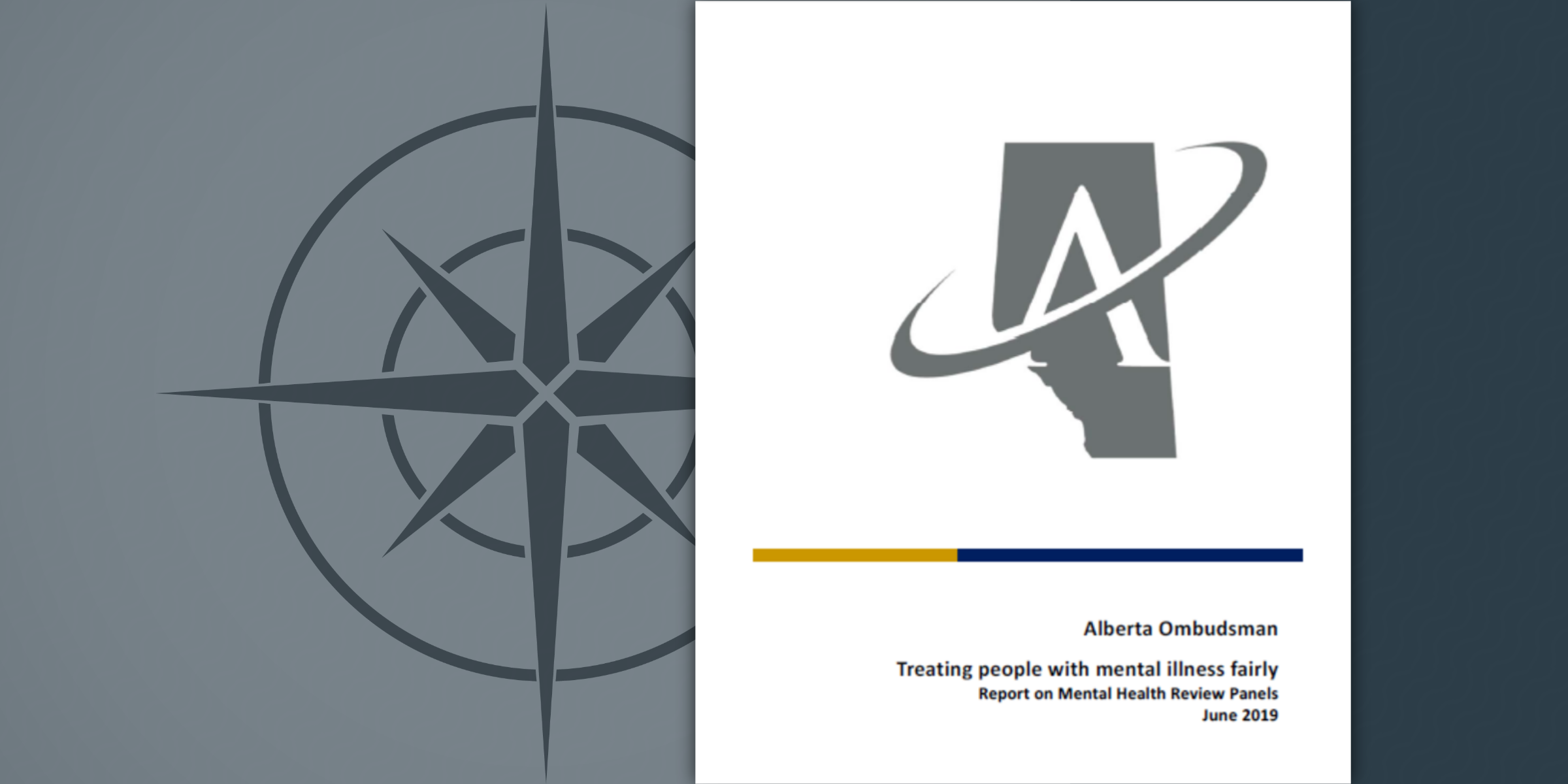 This lesson certainly applies as the Ombudsman accepts the final progress report Alberta Health posted to its website in November 2021 in response to the 2019 Ombudsman Own Motion report, Treating people with mental illness fairly – a report on Mental Health Review Panels. Alberta Health made significant improvement in the two years since the Own Motion recommendations were offered. Notably, these advancements aim to strengthen protections for patient rights, enhance notification requirements, and facilitate access to Mental Health Review Panel (the review panel) hearings. Changes include passage of legislative amendments; changes to forms and publications; enhancements to a data system allowing for better performance monitoring by Alberta Health; and to the review panel procedures. While the Own Motion investigation is now officially closed, it is closed with an awareness that events and new complaints to the Ombudsman have already generated questions about how well some of the recommendations have been implemented and how well they work in practice. This is natural as complex systems continually evolve.

The Alberta Health post on the open government portal is called: Response to Treating People with Mental Illness Fairly: A Report on Mental Health Reviews Panel – Final progress report to the Alberta Ombudsman, 2020/21.

Effective change cannot be imposed unilaterally. It works best when several parties collaborate on solutions. While the progress report responds directly to the Own Motion, the updates to the Mental Health Act (the Act) proclaimed in June 2020 go beyond the Ombudsman’s recommendations. Alberta Health had additional motivation to modernize the Act and review process.

Other players called for change. The Own Motion report confirmed recommendations made over several years by the Mental Health Patient Advocate (the Advocate). The Advocate’s unaddressed concerns were one of the prompts that lead the Ombudsman to open the Own Motion investigation in 2016, which led to nine recommendations to solve problems and ensure people with mental illness are treated fairly.

Without question, change was hastened because within a month of the Ombudsman releasing her Own Motion report, Justice K.M. Eidsvik rendered a decision in the Court of Queen’s Bench (JH v Alberta Health Services, 2019 ABQB 540) that identified many of the same issues and recommended many of the same changes. In an extraordinarily comprehensive decision, Justice Eidsvik struck down sections of the Act and imposed a one-year deadline for revising it.

While the government expressed support for many of Justice Eidsvik’s findings, it nevertheless appealed the case to the Alberta Court of Appeal, but Eidsvik’s ruling was confirmed (JH v Alberta (Minister of Justice and Solicitor General), 2020ABCA317).

The journey for the Ombudsman actually began in 2013 when a complaint was received from a citizen about a decision of the review panel. As is often the case, the Ombudsman investigation raised questions not so much about how the individual was treated as about the administrative fairness of the review process itself. The 2013 complaint was the first received about a review panel decision for over 10 years. Several others followed. The investigations demonstrated the benefit any agency gains from periodic external oversight by the Ombudsman. Expectations for fairness evolve over time as a result of academic thought, court decisions, and changes in society. The review panel processes existing in 2013 probably met the standards of the time when they were first devised, but they did not meet the needs of the 21st century.

The first Ombudsman investigations in 2013 and 2014 identified many of the same unfairness issues eventually found in the 2019 Own Motion, in yearly Advocate reports, and the JH court decision. The Ombudsman findings in relation to individual complaints were accepted in 2013 and 2014, but full implementation never occurred. The process was, and still is, complicated by the fact there are three independent review panels serving the north, central, and south regions of the province. Although the review panels meet to discuss common interests, they operate relatively independently. Recommendations made to one review panel were not automatically transferred and applied by other panels.

The advantage of an own motion investigation is that a public report could be issued beyond the quasi-independent review panels to the responsible department and minister. Change is more effective when wholesale policy is revised, including to the fundamental building block, the Act itself.

As previously stated, government policy must continually evolve. Recent complaints to the Ombudsman have generated two examples that show where further improvement might be necessary.

Recommendation 2 in the Ombudsman’s Own Motion report attempted to resolve the situation where patients ask for a review under two different sections of the Act. The two sections outline a different number of days for notice of hearing to be provided. The legislators recognized an admission decision affecting personal liberties differs from a treatment decision. Longer notice granted to admission or renewal hearings provide all parties more time to prepare for a hearing. Even though the timeframes are incompatible, often review panels schedule one hearing. Scheduling one hearing may benefit all parties, including the patient. The Ombudsman recommended that review panel decisions demonstrate patients understood their options and had input into the scheduling decisions. A recent investigation suggests a consistent process across the province has yet to be achieved. This will warrant monitoring.

Recommendation 5 addressed the need for review panels to render written reasons quickly after a decision is made. In its response, Alberta Health assured the Ombudsman’s office that when decisions are made, written reasons are now more likely to be issued to the patient on a timely basis. Timely decisions are essential if the patient is to form the intent to appeal to court and organize an appeal. Timeliness has improved, but it appears exceptions still occur. In the case where the review panel confirms the patient’s admission, any exception has the potential to severely restrict a person’s liberty. Further consideration may be given to this issue.

“Transforming services for mental health patients is complex and will continually need adjustment to fit emerging needs. The impact on people’s lives is dramatic,” reflects Marianne Ryan, Alberta’s ninth Ombudsman, in position since 2017. “Patients with mental illness may not be able to provide informed consent and may still need to be hospitalized and treated against their will. While the need for systemic change in Alberta was acknowledged and significant progress made, much remains to be done. Decisions that affect a human being’s liberty and ability to make personal treatment choices must be administratively fair.”

Fortunately, patients in Alberta still have access to the Advocate. They retain the right to complain to the Ombudsman about review panel decisions.  The need for these services will never disappear.

For administrators in government departments and organizations dedicated to perpetual improvement, the continuation of this journey will come as no surprise.  This is good news, most of all to the people across the province suffering the devastating effects of mental illness.

The Future of Ombudship in Canada
November 4, 2020