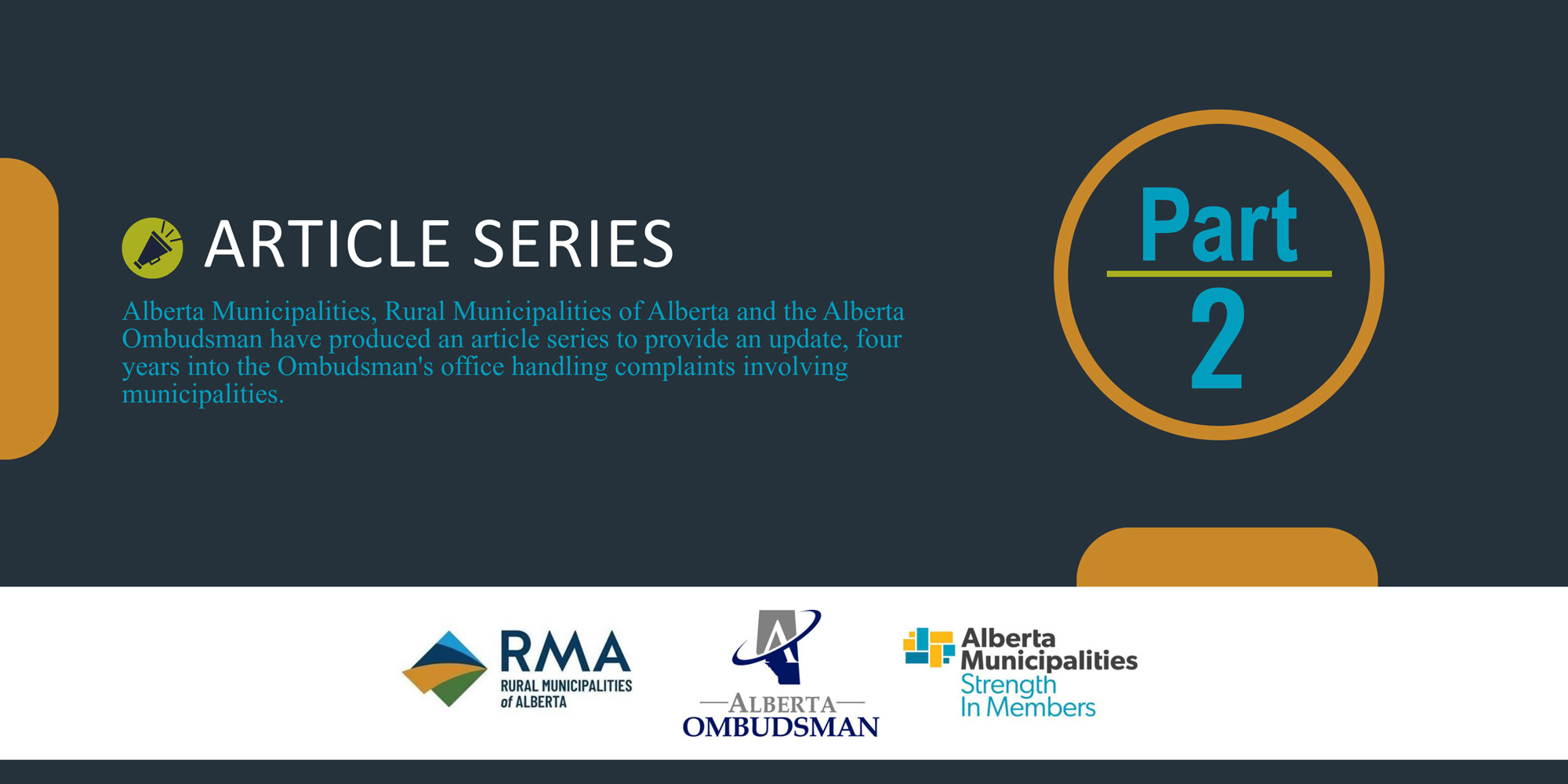 This is the second in a series of articles Alberta Municipalities, Rural Municipalities of Alberta and the Alberta Ombudsman have produced to provide an update, four years into the Ombudsman’s office handling complaints involving municipalities.

Complaints are registered against even the most effectively run municipalities. When a complaint generates a call from the Ombudsman, many municipalities welcome the opportunity to consult on solutions with a subject-matter expert on administrative fairness. The following real case examples serve to illustrate types of complaints the Ombudsman receives—the complainant and municipality’s names have been removed to protect confidentiality.

Case Related to Municipal Development, Zoning and Land Use

A senior couple affected by an annexation agreement between municipalities wanted to continue to live in their home which over the years had been modified for their special needs. The Waltons’* final wish before annexation was the approval of a subdivision. They understood that if the subdivision was approved prior to annexation, their municipal taxes would be grandfathered in at their current tax rate. If they altered their land use after annexation, a new tax rate would apply, resulting in a difference of several thousand dollars a year. It turned out the Waltons misunderstood the rules.

The Waltons received conditional approval for their subdivision plan shortly before their land was annexed. The Waltons met the conditions for their subdivision after annexation. The plan was endorsed by the annexing-municipality and was subsequently registered with Land Titles. However, as a result of the registration of the subdivision, the Waltons no longer qualified for a special tax consideration and their tax rate increased.

The Ombudsman investigated whether the process of notifying the Waltons of the annexation was administratively fair. The legislation was clear that it was the registration of a subdivision plan with Land Titles that would impact a landowner’s tax rate. The public consultation documents used by the municipality did advise that subdivision of land would end the special tax consideration. However, the public consultation documents did not specify the triggering event that would end special tax considerations.

The balance between simplicity and specificity can sometimes be a difficult one. In this case, the Ombudsman found the municipality had acted within their legislative authority and followed an administratively fair process. Still, there was an opportunity for the municipality to improve their future communication about special tax considerations. The Ombudsman suggested future public consultation documents for annexations should explicitly state the triggering event for the end of a special tax consideration. The municipality agreed to do so. Using precise language when sharing information with the public can assist with understanding otherwise complex processes.

The Ombudsman looked deeper into a code of conduct complaint against several elected officials and recommended a municipal council provide a written decision to the complainant, including a clear explanation of how their council code of conduct bylaw was applied.

The Ombudsman’s office assessed the scope of the complaint, relevant policy and legislation, the code of conduct bylaw, and interviews statements. Then the evidence was weighed against the Ombudsman’s eight Administrative Fairness Guidelines.

The Ombudsman found the municipality’s process for reaching a decision was fair—it consulted with legal counsel appropriately about the matter which helped prevent an apprehension of bias. Further, the action taken was consistent with the municipality’s previous approach when handling similar complaints. However, the Ombudsman found no reasons for the decision were communicated to the affected party. To be administratively fair, there must be a rational connection drawn between evidence and conclusions. The Ombudsman recommended a written decision be provided including reasons why the complaints were dismissed with references to the appropriate section(s) of the code of conduct bylaw. The municipality accepted the Ombudsman’s recommendation and provided the affected party with the required written response.

Homeowners affected by a water line break were surprised when the municipality charged them for the cost of a repair on their property. The municipality declared the water line break an emergency and hired a contractor to fix it. Although the Jorgensens* were advised of the action taken, they were not notified upfront they would be charged.

The couple initially complained to the municipality council but were not satisfied when the council decided the cost of the repair would remain their responsibility. When the Jorgensens complained to the Ombudsman’s office, an investigation found the municipality had acted within its authority to declare the matter an emergency. However, the Ombudsman also found a lack of policy on water-related issues that outlined how notification should occur, who should be responsible for repairs, and what opportunities should be afforded to the residents to do the repair.

The Ombudsman recommended the matter be reheard and the municipality integrate a process for water-related emergencies into its existing water and sewer services policy. A robust policy ensures residents know what is allowed in their municipality and safeguards administrators against complaints relating to inconsistent processes.  In the end, the council amended its bylaws and reimbursed the owners for most of the costs incurred.

Many complaints to the Ombudsman are about decisions of quasi-judicial bodies such as the local Subdivision and Development Appeal Board. If the Ombudsman opens an investigation, the focus will be on whether a fair process was followed rather than on whether the decision was correct.  A fair process should include administrative fairness principles to ensure natural justice is served.  This means the complainant had fair opportunity to participate in the decision-making process, there was no obvious bias and adequate reasons were given for the decision that relate the facts of the case to applicable policy and legislation. The inclusion and degree of adequate reasons is a common recommendation the Ombudsman makes to decision-making panels. The written decision must allow the reader to understand why the panel reached the decision it did. Many times, the complaint can be resolved if the panel issues an addendum to the original decision.  In a few cases, the Ombudsman might recommend a matter be reheard.

Other Legal or Appeal Processes

Before the Ombudsman’s office will investigate a complaint, all other relevant appeals and reviews must be completed first. For example, a matter involving a subdivision application may need to be heard by the local Subdivision and Development Appeal Board (depending on the specific area of concern) before a complaint may be investigated by the Ombudsman’s office. If judicial review by the courts is required for a particular decision made by a municipality, this legal action must be taken and completed. The Ombudsman will not investigate any matter ruled on by a court.  If a complaint is filed with the Ombudsman following a court decision, the Ombudsman may consider issues not reviewed by the court. If an application for an appeal or statutory review is not filed before a legislated deadline, a complaint to the Ombudsman may still be considered. The Ombudsman will exercise discretion and may choose not to investigate if the complainant neglected the opportunity or chose not to engage in the legislated process. The Ombudsman will also exercise discretion if the complaint submitted is more than a year old. Some older complaints are accepted, but many are refused.

* The complainant’s names have been changed to protect confidentiality.

In the third article in this series, the Ombudsman’s office will explore how to deal with unreasonable complainant conduct, namely, how to manage difficult complainant behaviour in a way that’s fair to them and the organization.